The story of the WWII Bomber, still resting at the bottom of Badin Lake, has captured the public’s imagination for decades. But why not?   The story has something for everyone.  It is  peppered with mystery, even intrigue.  It is about military aviation  with a smattering of romance and a good dose of eeriness. In an attempt to piece together a timeline I have drawn information from official communications and news articles (in italics).

08 June 1944  approximately 1400 military time, a call comes  into Cherry Point Air Force Base, NC from Morris Field AFF, Charlotte NC.  A “Lost Plane Procedure” has been instigated when it has become apparent PBJ 89050, a Marine Corps plane,  and two personnel are an hour overdue for arrival.  The mission, with Second Lt Charles McDaniel, Pilot, USMC and Ensign John P.  Withrow, Co-Pilot, USNR,  is to ferry the new aircraft to Cherry Point from Columbus OH  for training exercises.

08 June 1944 approximately 1600:   a telephone call to Cherry Point reports a “B 25” type aircraft has crashed into the Yadkin River Reservoir at Badin NC at 1300 military time.

08 June 1944:  Cherry Point Survey Party assembles, is briefed and flown to Morris AFF in Charlotte;  transported by truck the remaining 50 miles from Charlotte to Badin.

There are 17 members in this contingent.  They operated from a barge loaned by Alcoa.  Before the aircraft  was located  the team used 2700 pounds of dynamite in hopes of floating the plane.

10 June 1944:  Survey Party returns to Cherry Point.  Identity of the plane has been confirmed by  the Pilot Acceptance Form found floating on the surface of the lake.   Team reports that salvage was impossible with the present diving equipment and personnel available;  the plane is submerged in 150 feet of water.

Considerable difficulty exists working around the massive  trees that are on the river bottom.  There is the constant danger of diving gear  becoming tangled up in them . Visibility stops beyond 90 feet and there is a deep layer of mud over everything.

10 June 1944:  A request for highly trained divers with needed equipment to assist in the recovery is made to the Department of Navy.

10 June 1944:  Department of Navy responds with a  request for  transport of a team and gear. Crew consists of about 25 men, Navy and Marine. Included in the equipment are an amphibious boat with cranes and a large barge.

11 June 1944:  Douglas Transport aircraft is dispatched and returns with the team.  Divers are briefed on aircraft’s specs and  area’s terrain.   Embark by truck to the crash location.

Salvage operation is discontinued after 1 week due to hazardous conditions.  Results are negative.  A truckload of wreckage was removed.  Neither remains of the plane nor pilots are recovered.

Understood that the plane was virtually demolished from the crash.

Report:  Plane is resting in 134 feet of water on a silt bottom of 10 feet.  A  grove of trees covers the river bottom ; heights of 20 to 50 feet.  Extracting the plane will only be accomplished by pontoon type buoys or flotation bags to raise the aircraft  to the surface, float it to shore and then lift it out of water.  Bodies of Pilots are not found.

Report:  Cause of Accident was flying low over water, made a wide turn and dipped wing causing crash into deep waters of the Reservoir.

How did we get to this point in the story?  Charles McDaniel, the pilot of the plane, was a local boy from Palmerville.  Before joining the Marines he had graduated from Badin High and worked at Alcoa.  Seven  months prior, he had married his sweetheart Mary Hill, also of Palmerville.

Charles and co-pilot  John  Withrow had encountered bad weather during their mission prompting them to make an unscheduled stop at an airfield in Charlotte.  Charles and John took the short trip  home by bus for an overnight visit  with the new Mrs. McDaniel.  After a home cooked breakfast the pair returned to Charlotte.  At 1223 military time, they cleared Morris Field AFF for Cherry Point AFB. Accounts of shaking of window glass as they flew over spanned from Badin to Albemarle.

By most oral accounts Charles had promised Mary he would do a flyover;  circle 3 times as a goodbye and be off on his mission.  This would require him to veer from the official  flight path by approximately 50 miles.  Mary and her mother were waiting  in front of their home for Charles’ farewell  gesture.  As promised, the plane circled above the women, flying low above the river.  Charles made a wide turn and “waved” by dipping  his wing.  Mary waited for another circle.  It never came. (Some accounts say there were 2 circles completed)

Mary’s mother and other witnesses report hearing  the sound of a crash and smelling a strong odor of gas.  Many said they heard the sputtering of an engine, perhaps as it failed.  Mary stood still, frozen,  not sensing  the sounds or smells others would later recount.  Charles was faulted with “flat hatting”, or showing off.  Not many locals buy that story.  He had, however, undeniably veered from the official flight plans.  As turns out, the crash occurred  only two days prior to D-Day.

What about that sputter so many heard?  Could the plane, not pilot, be at fault?  The smell of gas could be a sign of emptying gas tanks when you know you are going down.  Did he fly out over the water to prevent crashing closer to home?  These would be acts of heroism, not showing off.  Others say that perhaps a strong northeast wind created rough air pockets  through the River Channel that is flanked by two hills. Many questions remain not fully answered in peoples’ minds.

Due to the date it is reasonable to wonder if  the Navy was focused on the escalating war effort more than this difficult salvage operation .  Some speculate the military might have been  hiding weaknesses in the bombers performance so as not to alert the enemy. Squadrons of these planes would fly throughout the War.   What did they know that  they aren’t telling us?  Is it all better left buried in the Yadkin.    That is a question that crossed more than a few minds.

When Alcoa created the reservoir for the Narrows Dam in 1916 they left much of the land as it was, without clearing the woodlands.  Are the pilots forever  trapped in this underwater forest? Perhaps still strapped in their ejected seats?  Do Jurassic size catfish really troll those waters, with looming dark shadows over anyone searching?   The exact location and condition of the plane and  two  bodies are still unknown.

Just what kind of plane was the Badin Bomber,  described as a B-25 type, blue, twin engine, twin tailed ?

McDaniel and Withrow were piloting a Marine Corps plane:  PBJ-1.  Not many people know that the US Marine Corps flew bombers in WWII.

PBJs came about by chance. In 1943, North American, the B-25’s manufacturer, produced more B-25s than the Army Air Corp could use.

The US Marine Corps, however, was looking for a medium bomber. They agreed to take the B-25s and use them for “night heckling”, anti-shipping missions or close air support of beachheads and landings. Taking the unwanted equipment was nothing new for the Marines, they often received obsolete or surplus equipment from the Army or Navy.

The Marines designated the B-25s “PBJ”. PB indicates Patrol Bomber and the J is an alpha-code designating the manufacturer, North American Aviation.

The Marines were innovative in customizing the PBJs for the jobs they faced. As most of the missions were performed at low altitude, there was not much need for the glass nose/bombardier position. It was replaced with a solid nose and armed with up to 8 – .50 caliber machine guns, or in some versions, a 75mm cannon.

9 PBJ squadrons made it overseas before the war ended in the Pacific. 26 PBJs were lost in combat and 19 were lost in operational accidents while in a combat zone.

Cherry Point Air Force Base was a  designated training facility for the bombers. 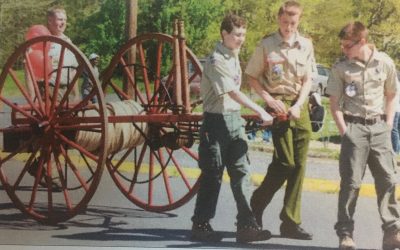 In 1916 Tallassee Power Company and the men of Badin formed the Volunteer Fire Department.  Among the first equipment they purchased were two 1909 Hand Pulled Hose Carts.  They also purchased a small chemical cart and a hook & ladder system.  The equipment was stored in a... 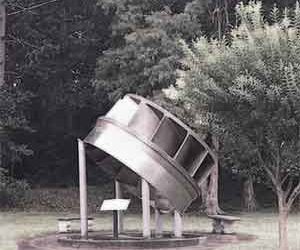 This industrial artifact stands at the center of downtown Badin on the historic green space .  Curiosity often overcomes the visitor to the town prompting them to   pull over the car, get out and stand in  wonder at this “art piece”: a monument to industry here in Badin.   It is 28,400 pounds  of...