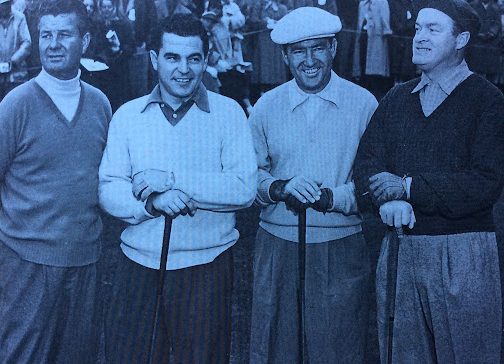 Based on Article in April, 1949 SPORT Magazine by Wilton Garrison

Johnny with Bob Hope among others. He is 3rd from left in photo.

The Palmer family had moved to Badin from Eldorado, Montgomery Co, for steady work at the aluminum plant.   Johnny was eight years old at the time. By thirteen, he was found looking for caddy work at the local Stanly County Country Club to earn a little spending money.

Club Pro Dugan Aycock remembers that the future star almost didn’t make the cut.  The first interview went like:  Dugan…What do you know about Golf?   Johnny…. Nothin’.  Dugan says he quickly ran Palmer off the course with a club, remembering him as “ugliest kid I’d ever seen”.  His childhood nickname of “Booger” stuck with him, although he appears in his photos  to have grown into  a handsome dark haired man with a winning smile.  Somehow, Johnny  secured a caddy position at the Club.

Caddies could borrow clubs and play golf early Monday mornings before the course opened to members.  Johnny started as a “southpaw” mainly because the first set of clubs he could use were for a left handed player.  When new Pro, Earl Estridge, came to work he recognized Johnny’s talent and turned him into a right-hander.  At age 16 Johnny played in his first Junior Tournament with a set of unmatched clubs he had managed to gather.  Known as the best local player, he continued to play  in amateur matches in his spare time  over the next few years .  His first big tournament, North & South Open at Pinehurst,  was in 1938 at the age of 20. In 1942 he was being talked about as a promising newcomer.

Johnny had a full time job with Alcoa and played Golf in his vacation time or when on a “special leave”.  He worked first as a crane operator but quickly moved up to payroll clerk.  He always dreamed of being a Pro Golfer though.

In 1943 he joined the Air Force as a gunman on a B-29 and flew 32 missions over Japan.  He says he never touched a golf club during that time… he was just concentrating on returning home alive.  He returned to Badin but just had to go for his dream.  He quit Alcoa and joined the Pro Tour in New Orleans in 1946. 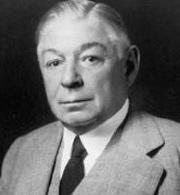 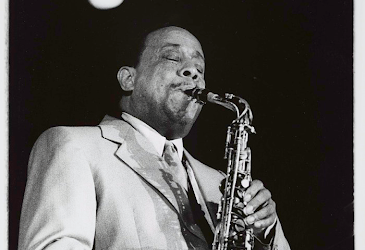 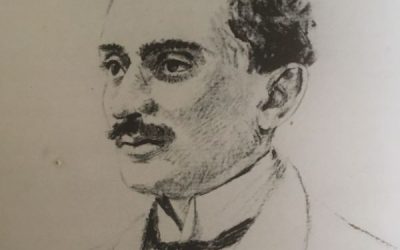