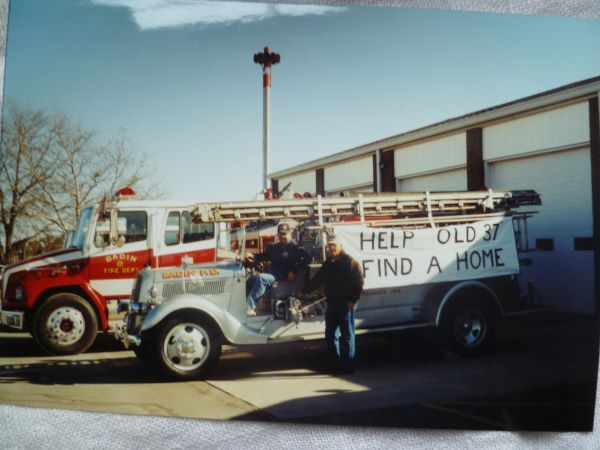 When the Badin Volunteer Fire Department was expanding its fleet of modern fire fighting equipment a new home was needed for the department’s first emergency responder.

The 1937 Ford American LaFrance Fire Engine had been relegated to a few ceremonial duties and space was needed for the much needed modernization effort. Originally purchased in 1937 by Carolina Aluminum, it took the place of hand pulled hose carts and strategically located hose houses.

In 2004 the Badin Museum Volunteers and Friends took on the task of building a home for “Old 37”.  On land adjacent to the Kindergarten Building they built a large frame structure with garage door to back the engine into.  Hose Reel  carts,  a fire whistle, and other fire fighting equipment  are housed in the building as well.  On the outside yard, a Hose House is on display.  The engine with its silver painted exterior is now on permanent loan from Badin VFD  to the Badin Historic Museum.  It’s a favorite exhibit among the kids, including the retired firefighters and their  families.

Once a year the silver LaFrance still makes an appearance in the Palestine Christmas Parade.

This year the Museum invested in a new glass paneled  door so the Old 37 can be appreciated during  hours we are not open. 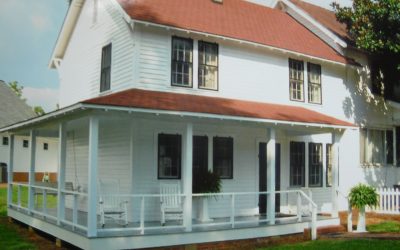 In 2004, while preparing to build the Firehouse Museum building, the adjacent quadruplex came on the market.  The idea for purchasing and restoring the neighboring property quickly took hold.  To bring the apartment back to its original state would take lots of funding and eventually two... 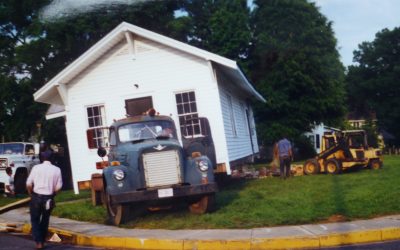